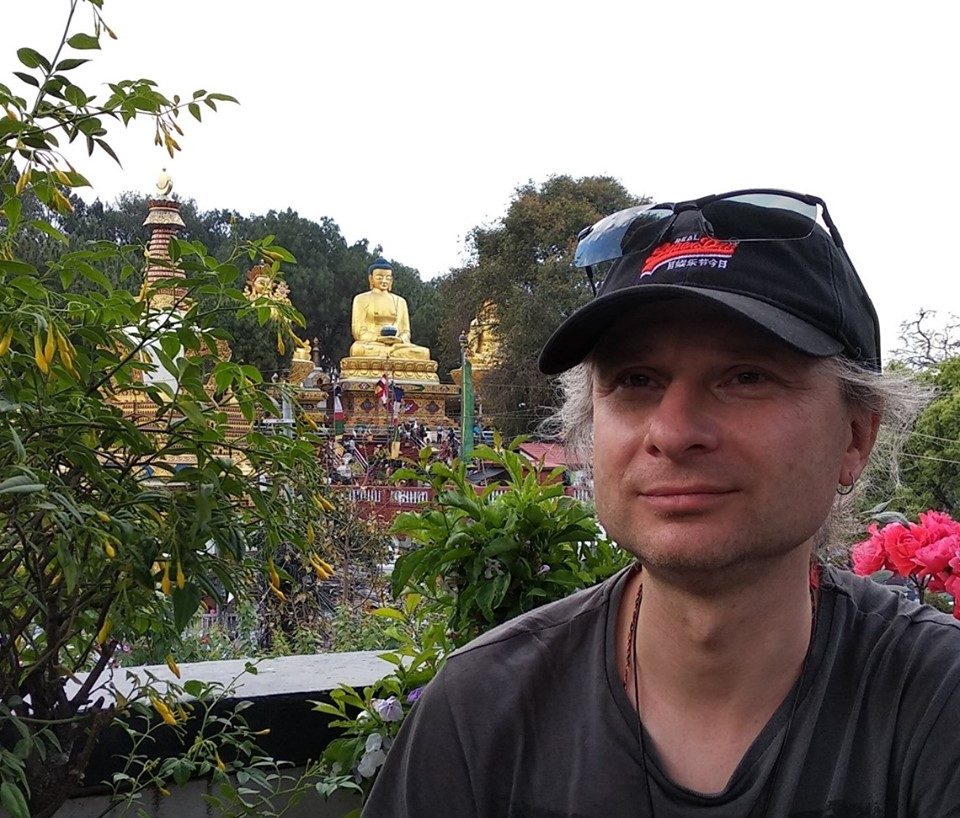 Born in 1967 in St. Petersburg (then Leningrad), Russia, Dmitry was raised in a highly cultural environment and studied music from the age of six to nineteen after which he worked as a composer and musician as well as playing in various ‘underground’ rock and fusion bands (most of this kind of music was severely frowned upon by the Soviet authorities) until he left Russia for the UK in 1993.

Parallel to his musical interest, Dmitry also developed a fascination for ancient history and archaeology. From the age of ten, he attended after-school classes at the Hermitage Museum where, for six years, he studied ancient history, mythology and art history from experts such as the museum director, Boris B. Piotrovsky.

From the age of eight, during the summers 1975-81 Ermakov participated in archaeological digs at the Belgorod-Dnestrovsky fortress near Odessa, led by his aunt, Academician Prof. Galina Mezentseva, Head of Archaeology at Kiev University. These formed part of her University courses, so he was able to attend all her afternoon lectures on archaeological methodology and history. It was this interest in archaeology which led Dmitry to join the University of Leningrad’s expedition to Khakassia near border of Tuva in the summer of 1987 to excavate Scythian Kurgans. This was his first trip to Siberia and it is there that he had his first contact with its powerful gods and spirits.

Ermakov’s interest in Buddhism also began in his childhood, when, at the age of ten he read a book called Gods of the Lotus by E. Parnov which detailed his trip in the Himalayas and opened up a whole new world of deities and religions for Dmitry. In his teens this interest was combined with martial arts based on Taoism and Zen philosophy, and Qi Gong which Ermakov received from the Chinese adept Gu Yui from Nankai University, Tianjin, China. In the Soviet era such fields of practice and study were largely underground and materials were very limited so it was only with the coming of Perestroika in 1989 that Ermakov was able to receive a blessing for the Lotus Sutra from a Japanese Zen master and receive teachings and initiations of Green Tara and Vajrasattva from a Tibetan lama, Bakula Rinpoche.

The following year Dmitry met the Dalai Lama in Riga. It was this contact with Tibetan Buddhism which took him to Buryatia the first time, in the summer of 1990, to attend the Maidari Huural celebration (Maitreya festival) at the only Buddhist monastery left after the Communist persecution, the Ivolginskiy Datsan near Ulaan-Ude. He then travelled to the Eastern part of the region and made friends with the family of the late Batodalai Dugarov, Buddhist tantric practitioner and thangka painter. They invited Dmitry to spend the winter with them, practising meditation and healing. This was his first introduction to Buryatian culture.

In 1991 Ermakov went to Moscow to receive teachings and empowerment from the Dzogchen cycle of Longchen Nyingthig and a Tantric initiation of Kurukulla from Khenchen Palden Sherab and Khenpo Tsewang Dongyal. This had a very profound effect on him and he began practising the preliminaries and meditation. Over the years Dmitry received further Dzogchen and Tantric teachings from them, including Vajrakilaya.

The following year (1992) Ermakov met Chögyal Namkhai Norbu in Riga and followed him on a two-month teaching tour in St.-Petersburg, Moscow and Ulaan-Ude during which Rinpoche gave Dzogchen teachings. Since that time, Namkhai Norbu Rinpoche has been Ermakov’s main Buddhist teacher and he have attended his teaching retreats in the UK, Italy, Russia and Mongolia. In Ulaan-Ude Dmitry befriended several Buryatian bө and utgan (male and female shamans) and translated between them and Chögyal Namkhai Norbu.

Ermakov returned to Buryatia in the summer of 1993 with a Buryatian utgan he had met in 1990. Back then, prompted by his visions and experiences, he had been working with a group of healers and psychics in St.-Petersburg of which she was also a lose member. Together they stayed in Ulaan-Ude, Lake Baikal and the Tunka region visiting holy places and meeting bө and utgan.

The next summer Dmitry headed East once again, first to Ulaan-Bator, Mongolia for teachings and initiations by Namkhai Norbu Rinpoche and then to Ulaan-Ude, for another teaching retreat where he stayed with Vera G. Naguslayeva, a retired doctor and respected utgan. Ermakov had a vision of her protective deities and so she decided to introduce him to a group of bө and utgan who were planning a tailgan pilgrimage. When they came to study the route on the map, Dmitry was able to name each location and the deity residing there without any previous knowledge. As a result, they asked him to join them on their trip later that summer and he accepted. They visited many holy sites and performed many rituals at which Ermakov was invited to participate. At the end of that trip, the bө and utgan offered to initiate him as a bө but Dmitry declined; animal sacrifice is a necessary part of the initiation ritual.

For several years Dmitry was unable to return to Buryatia but finally in August/September 2003 he had the opportunity to spend time in Ulaan-Ude and on the shores of Lake Baikal where he was invited to do a personal retreat and take part in rituals. He was also able to carry out intensive research by studying texts only available in Russian or Buryatian and by conducting interviews.

Ermakov’s connection with Yungdrung Bön goes back to 1989 when he came across a picture of the Bönpo Buddha Tönpa Shenrab Miwo in The Crystal and the Way of Light by Namkhai Norbu Rinpoche. He immediately felt drawn to him. There was next to no material on Bön available in the USSR at that time (Dharma materials were still not openly and were distributed through underground networks) but soon after Dmitry was given a transcript of Bönpo Dzogchen teachings which found a deep resonance within me and even got hold of a cassette of the propitiation rite for a Bönpo Protector, Midhu. However, it was not until 1995 that he was able to meet Yongdzin Lopön Tenzin Namdak Rinpoche, in Amsterdam, who has since been his main Bönpo lama. In 1996 Ermakov spent three months at his monastery, Triten Norbutse, in Nepal where I received personal instructions and was able to study and practise the Yungdrung Bön tradition.

Since then Dmitry have received many teachings on Dzogchen and Tantra from Yongdzin Lopön Tenzin Namdak Rinpoche and other  Bönpo lamas at retreats and privately in Nepal, Austria, Germany, Holland, France and UK. He returned to Triten Norbutse in spring 2004 to deepen his practice and knowledge of the tradition. Later that year, a new Yungdrung Bön centre – Shenten Dargye Ling – was established in France under the guidance of Yongdzin Rinpoche. Dmitry and Carol were asked to serve as the first gekhö-caretakers there. During the 18 months they spent living in Shenten Dargye Ling, they worked on transcribing teachings given by Yongdzin Rinpoche in English and created an archive of over 30 texts ranging from Causal Bön, practice manuals to treatises on Dzogchen, and became firm friends with a wonderful monk and scholar, Geshe Gelek Jinpa (currently Khenpo of Shenten Dargye Ling) who helped a lot in the final stages of the research leading to the publication of Bө and Bön.

In 2007/8 Ermakov was again able to spend three months at the Triten Norbutse monastery in Kathmandu where, with the help of Yongdzin Rinpoche, Khenpo Tenpa Yungdrung and some very learned Geshes (Pönlob Tsangpa Tenzin, Drubdra Khenpo Tsultrim Tenzin, Geshe Tenzin Yangton, Geshe Lungrig Nyima, Geshe Samten Tsugphü and others), he finalized his research. Over the years, Yongdzin  Lopön Tenzin Namdak Rinpoche, Khenpo Tenpa Yungdrung and Geshe Gelek Jinpa have kindly shed light on many aspects of their tradition, including the Bön of Cause and historical matters. First edition of Bө & Bön was published in May 2008 in Kathmandu by Vajra Publications.

On the basis of this publication, Prof. Charles Ramble invited Dmitry to Oxford University the following year to study Tibetan with him on the post-grad course in Tibetan Studies. Ermakov has subsequently been asked to lecture at several universities throughout Europe, including Oxford, SOAS, Cagliari, Vilnius, Hamburg and so on.

In 2011 Dmitry was invited to speak at ‘Bon, Shangshung, and Early Tibet’ conference where he delivered a paper Bön as a multifaceted phenomenon: looking beyond Tibet to the cultural and religious traditions of Eurasia.

With the blessing and support of Yongdzin Rinpoche, in 2012 Dmitry and his wife Carol established the Foundation for the Preservation of Yungdrung Bön of which he is currently the Chairman. The Foundation was officially registered as a UK Charity in 2017.

In March 2020, Ermakov was to present two papers – The Importance of Mt. Kailash in the Bön Religion and Magic Duel between Milarepa and Naro Bonchung: Who Really Won? – at the 5th International Conference on the Phenomenon of the Holy Mt. Kailash hosted by University of Hamburg. The conference is now rescheduled to take place in March 2022 because of the COVID-19 pandemic.

To date, Ermakov has collaborated on producing over 100 transcripts and translations on Bön, both for the general public and for the international Bönpo sangha.