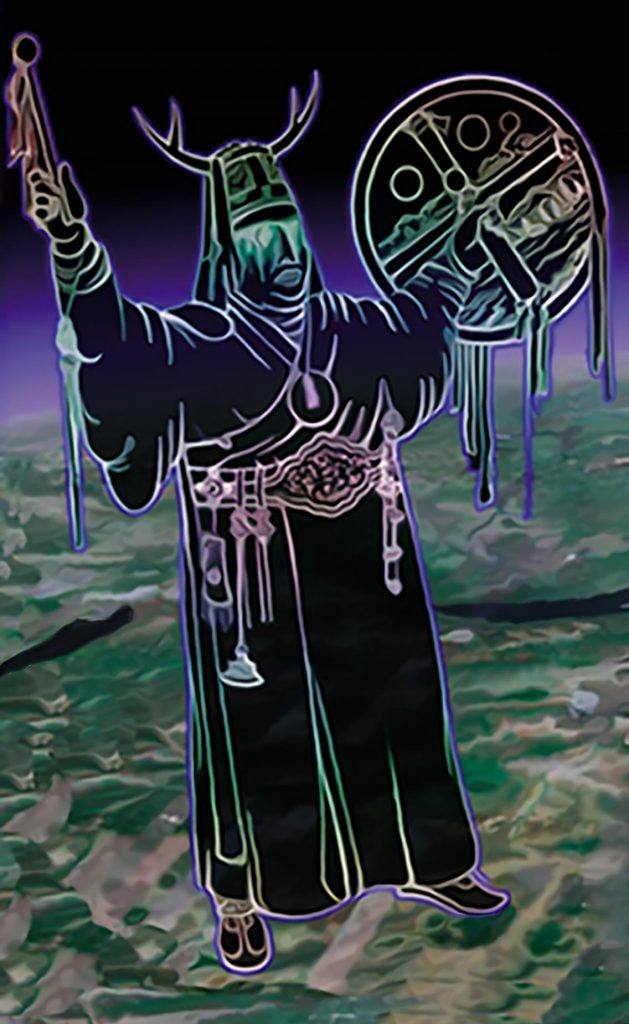 Today, the word ‘Shamanism’ is used to denote a whole range of belief systems. For some, ‘Shamanism’ is defined as an ancient technique of ecstasy – i.e. all sorts of possession and mediumistic techniques; others apply it to a great variety of spiritual paths belonging to very different cultures all over the globe, including those which make little or no use of possession techniques. On top of that we now have the so-called ‘New Age shamans’ who believe in what they like, following a mixture of their own making with all but no idea about the choosing, obligations and work of a real shaman in the original sense of the word. Furthermore there is confusion between ‘Shamanism’ and ‘Paganism’, names which are often used interchangeably. In view of this I have tried to avoid the term wherever possible.

In Siberian shamanic traditions (as in Bön and Buddhism) all techniques and teachings have their own precise source and are passed down through a line of authentic masters. Thus the principle of lineage is of great importance and has mechanisms safeguarding the purity of its transmission against external interference or corruption from within. It is precisely thanks to this principle of lineage that these traditions have come down to us today in good working order.

Meaning of the word 'shaman'

In fact, the word ‘shaman’ has a very precise meaning; it is a Russian corruption of the Tungus-Evenki word šaman, an adjective used to designate the priest of their religion. Many scholars have tried to lend the Tungus word šaman additional meanings such as ‘one who is excited, moved or raised’, ‘inner heat’ or to trace it to other languages saying that it is derived from Chinese sha men (沙弥), Pali śamana or Sanskrit śramana, meaning ‘listener’ and used to designate a Buddhist monk or wandering Buddhist preacher. These suggestions find no support in Tungus language or culture, and the last one is obviously completely off the mark as Tungus shamans have nothing whatsoever to do with practices and teachings of Buddhism. To clarify all this confusion I contacted the Russian scholar and Doctor of Philology, the leading specialist in Tungus language and culture at the Institute of Linguistic Research, Russian Academy of Sciences, St. Petersburg, A.A. Burykin, who kindly sent me the following reply:

The word šaman 'shaman' has only one meaning in the Tungus language group: it just means 'shaman', the priest. Some trace it to the verb sa-, 'to know' but this is highly unlikely because this verb has a long vowel while šaman has a short one [...] As for me, this Tungus word should be compared with the Nenets word sambana, a designation of one category of Nenets shamans. These sambana shamans shamanize to the Underworld in a similar way to the shamans of Tungus who, basically do mainly that.

At the beginning of the twentieth century, the absolute majority of western scholars who studied the native Siberian spiritual traditions insisted that the term ‘Shamanism’ should be applied only to the traditions of the peoples of North Asia and some small locations in Europe such as southern regions of Russia where Kalmyk Mongols settled. Scholars such as D. Klemenz, M.N. Hangalov, W. Radloff, R.Maack, L. von Shrenck, V. Bogoraz, V. Jochelson and many others unreservedly stood by the understanding that Shamanism as a religious and cultural phenomenon is limited to these territories and nations who traditionally inhabited them before the conquest of Siberia by the Russians. However, later researchers gradually departed from this clear definition and the term began losing its precise meaning and value. With the onset of the New Age movement, this term came to be applied to any kind of traditional or questionable, to say the least, New Age psychic techniques regardless of whether it has anything to do with Native Siberian traditions or the methods of Siberian shamans or not, thereby rendering this term completely meaningless and unsuitable for use in serious research. Some teachers adhering to religions devoid of the figure of a shaman nevertheless try to re-invent themselves as ‘shamans’ and their teachings as ‘shamanic’ in order to better sell themselves and their beliefs to the audience. In fact, they only damage their own tradition and further degrade the meaning of the word ‘shaman’.

There is nothing wrong with the term ‘Shamanism’ as such; although it suffers from the problem faced by all ‘isms’ – undue generalization – it can still be employed positively in the future if, by some caprice of fate, its use returns to its original definition and to the cultural and religious phenomenon it once represented.

Despite the fact that the various native Siberian spiritual traditions have many cults and concepts in common due largely to their similar cultural, religious and geographical environment, the differences between them are comparable to those between major world religions. One of the most important aspects found in all Siberian religions is Polytheism and indeed, this is very developed in modern-day Buryatian Bө Murgel which probably has the biggest and most complex pantheon among all the native Siberian religions. The main distinctive feature of Bө Murgel, however, is its cults of Huhe Münhe Tengeri (Eternal Blue Sky) and Tengeri (Sky-Dwelling Gods), so we pay special attention to these in this book. In my opinion it is these cults which are central to Bө Murgel and define the Bө‘s distinct techniques and approach, although their real meaning and significance can be easily overlooked or misinterpreted.

Buryatian ‘shamans’ call their religion Bө Murgel or Bө Shazhan, with murgel and shazhan both meaning ‘religion’ in general and bө being the main name. Bө Murgel is not peculiar to Buryats alone but is found in various forms among various Mongol tribes and also in Tuva. In Bө and Bön we will focus on the Buryatian version as it is this strand which I have studied and, to some extent, practised. Lake Baikal – the world’s largest volume of freshwater, home to many unique flora and fauna, source of inspiration and steeped in legend – is central to this tradition, and much revered.

A rich and powerful belief system, Bө Murgel’s priests (bө) and priestesses (utgan) were forced to shed many of the outer aspects of their religion – such as elaborate ritual costumes – under the persecution of the Soviet regime which saw many followers of Buddhism and Christianity slaughtered in the bloody repressions. The bө and utgan fared better, melting back into the magical web of the natural landscape, focussing on the more mystical aspects of their traditions retaining their core beliefs and invocations which are now once again practised collectively in the ancient power places of this vast and impressive land.

The author first travelled to Siberia in 1990 and secretly met with both Buddhists and Bө/Utgan. Gaining their trust thanks to his openness and certain psychic abilities, he was soon welcomed into the circle of Bө and Utgan and invited to participate in a ritual pilgrimage to many holy sites and, in time, to become an initiated Bө himself. It is this rare position of trust together with personal experience of the Bө Murgel rituals which brings this book to life, letting the reader glimpse a real vision of true shamanism in Siberia.

The author’s growing fascination with Bө Murgel led to an exploration of the ancient myths associated with Siberian shamanism, and Bө and Bön contains tales – for example, the Bө Murgel creation myth – which have never before been published in English. These myths and legends deepen our appreciation of the Bө and Utgan’s understanding of concepts such as cosmology, the Underworld, the soul and the afterlife, all of which we discuss in Bө and Bön. It is the understanding of these essential matters which shapes the Bө and Utgan’s approach to healing and magic, so by studying these concepts we gain insight into the ‘theory’ behind the powers of the Buryatian Bө and Utgan.

Practical techniques of divination, healing and magic are also explored and explained, and the reader is taken through the stages of initiation, with the origin and significance of each ritual object and garment clearly explained. The presentations are illustrated with striking photos, excerpts from the author’s diary and interviews with the Bө and Utgan.

However, this is in no way a ‘manual for shamans’. Rather, the author seeks to point out that – although many may be drawn to the mystical realm in which the shaman lives and works – only a select few are set aside for this dangerous and difficult path; one can take one’s place as a shamanist, but becoming a fully-fledged shaman is quite a different matter.
Facebook
Twitter
Pinterest
Reddit
StumbleUpon